During this same time frame, my good buddy, Jessica Aspen, continued to produce and publish. She has four coming out this year. FOUR! A combination of Novellas and a Novel in her Twisted Fairy Tale genre.

Color me tickled cobalt for Jessica.

It’s everything The More Cowbell Chronicles will not be.

I turn today’s post over to Jessica Aspen. Me? I’ll be living vicariously through her heroine in her recently released novel, The Dark Huntsman.

DIGGING UNDER THE BED

Hi Gloria! Thanks for having me here on your blog. I am pleased, proud, and (hmm I need another “p” word… ok, not going there!)

[Editorial Note: I would have gone with “panting.”]

I’m pleased, proud, and… over the moon about being your guest twice in a few weeks. Loved stopping by here in September for the cover reveal and now I’m even more excited to actually have the book out there. Yes, it’s here! My first full-length novel and it’s even available in print format!

[Pause for square of applause, cartwheels, and kazoo trill.]

As you know this book has been one I’ve worked on for several years. I even had it tucked safely under the bed for a while and I thought it might stay there. But lo and behold twisted fairy tales hit the mainstream and I thought, “Damn! I have one of those under my bed. In fact there are several.” So I pulled out my hatbox, blew off the dust-bunnies, and sorted through the junk. And finally, on the very bottom, I discovered The Dark Huntsman, all written and ready for polishing.

How do you decide it’s time to re-visit an old story? How did I reach the conclusion that after a year or two lurking under the bed this one merited one more look. That it wasn’t going to take so much effort that it wouldn’t be worth it? Well, like snowflakes, each story is different and some of them melt away without accumulation and some of them gather into a winter storm. The Dark Huntsman had all the right pieces to be worth pulling out from under the bed.

Number One: The story must not take too much re-writing. In other words, if it’s quicker to write a new book it may not be worth resurrecting this one.

The Dark Huntsman wasn’t actually my first attempt at writing romance. I’d dabbled before, but it was my first serious attempt, and it had seen several revisions with quality people. Quality people like… Gloria Richard! Yes, this was the story that I had hauled up the mountain with me to Margie Lawson’s famous (infamous?) retreat where the gals of WooHoo-U met and collaborated. And I’d entered it into the Golden Heart where, while it failed to final, it did receive several perfect scores. I guess you either like what I write or you don’t, and that leads me to number two.

Number Two: The story must be special, not just because it’s your baby, but it must have that Je ne sais quois that makes it worth the work. It needs to be something that you not only love, but that others think deserves a second chance.

I loved my baby, but did other people? Yes. Not only had it received nice scores in the Golden Heart, but it had also had some nice comments in other contests. But it had never quite garnered enough kudos to final in any of those contests. I’d sent it to agents and received back that they loved the concept, but it wasn’t quite there.

This is the perfect scenario for a manuscript that could be re-visited. It had spark, it had something special, it had a twist. And with a little more work it would be ready for prime-time. Readers loved Logan’s alpha male attitude and the fantasy element gave it a rapid firing plot that moved quickly through the romance.

Number Three: Is it timely? Is there a trend cycle happening?

How did I know this was the right time for The Dark Huntsman? Well, because I had come up with the concept in 2008 for a romance between Snow White and the huntsman, not the prince. And suddenly fairy tales were everywhere, including two about Snow White (usually neglected in favor of Cinderella) and one of those featured the huntsman as a hero. Someone stole my idea!!!

No, of course they didn’t. It’s been done before and it will be done again. All story-telling moves in cycles. This was this story’s cycle and if I didn’t hop up, and jump on, it would be over. And I’d be stuffing this book back under the bed. Just because I’d been twisting fairy tales for a long time, and just because I had already published Little Red Riding Wolf, and had Snow and the Seventh Wolf at my publishers, didn’t mean that there wasn’t room for another twisted fairy tale. There’s always room in a hot trend. And right now fairy tales are hot!

So there you have it. My under-the-bed tale of how I decided to re-visit Logan, and Trina, and the Tales of the Black Court. And guess what? By re-visiting this book I was able to re-start book two, Prince By Blood and Bone (a twist of Beauty and the Beast). It needed way more work than this one, but that was another consideration when I looked at this series. It was a series, even if book two was barely half-a-draft. When I realize the amount of work I had stashed under the bed it’s a wonder I could sleep at all. Hmm, I haven’t twisted the Princess and the Pea story yet, maybe it’s time for that one!

A fantasy romance of the Black Court

An evil queen, a dangerous man, and a witch, tangled together in a tale of Snow White…

Desperate to save the last of her family from the murderous Faery Queen, Trina Mac Elvy weaves a spell of entrapment. But instead of a common soldier, the queen has released the Dark Huntsman, a full blooded fae with lethal powers.

Caged for treason, Logan Ni Brennan, is ready to do anything to win free of the manipulative queen, even if it includes running a last errand for her…murdering a witch. The sight of Trina, ready to fight despite the odds, gives him another option: use the witch as a chess piece, put the queen’s son on the throne, and bring down the queen forever.

As the queen slides into insanity and her closest advisor makes plans to succeed to the throne, Logan secrets Trina away in the enchanted forest and makes a decisive move in his dangerous game of manipulation. But the gaming tables of fate turn on him, and when Trina’s life is threatened he discovers he risks more than his freedom…he risks his heart.

Enter the Goodreads Giveaway for one of ten PRINT copies of The Dark Huntsman. Contest closes October, 22nd, so click HERE and enter, today! 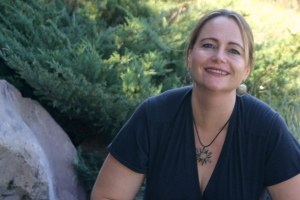 Jessica Aspen has always wanted to be spirited away to a world inhabited by elves, were-wolves and sexy men who walk on the dark side of the knife. Luckily, she’s able to explore her fantasy side and delve into new worlds by writing paranormal romance. She loves indulging in dark chocolate, reading eclectic novels, and dreaming of ocean vacations, but instead spends most of her time, writing, walking the dog, and hiking in the Colorado Rockies.  To sign up for Jessica Aspen’s new release email please click here.

FOLLOW JESSICA OR STALK HER OR BOP AROUND HER SITES AT:

GOODREADS (ADD THE DARK HUNTSMAN TO YOUR TBR STACK WHEN YOU VISIT!)

SO THERE YOU HAVE IT. PROOF, ONCE AGAIN, THAT I AM BLESSED WITH A PLETHORA OF TALENTED, PROLIFIC WRITERS WHO I’M HONORED TO CALL MY FRIENDS.

Leave a comment. Please! You know how I love to play around in comments. And, don’t forget to click Linky-Love HERE for a chance to win one of ten free copies.

14 thoughts on “THE DARK HUNTSMAN STALKS ME…& I Want to be Caught!”